GIPSY 4 EVER is the new eclectic project by Xavier Padilla, former Gipsy Kings’s bassist-composer. The novel 7 piece includes world class musicians who have performed too with the members of the multi Platinum selling and Grammy Award winner group The Gipsy Kings.

Mentored by Miles Copeland (Sting’s former manager), GIPSY 4 EVER preserves the original sound and tradition of Camarguese Rumba, the music genre made known to the world through the Gipsy Kings. In September 2016 it performed along Jethro Tull at the Plovdiv Roman Amphitheater. In May 2017, GIPSY 4 EVER was featured as the exclusive guest artist with the Russian Alexandrov Ensemble, doing a very successful 14-dates tour throughout the Czech Republic, filling all major stadiums of that country. In May 2018, the band successfully toured in Argentina.

Some of the GIPSY 4 EVER members have contributed with original compositions to the Gipsy Kings’s historical recorded catalogue. Therefore GIPSY 4 EVER is much more than a GK’s tribute band, is part of its history.

As its mentor Miles Copeland says, “GIPSY 4 EVER is a Tesla ride, updating classics such as Bamboleo, Volare, Djobi Djoba and Como Siento Yo. Even the shyest audiences can’t resist being moved by songs that anyone in the world already owns by heart. More so when these are laid down by legitimate musical heirs and masters to the idiom.”

Welcome to the real kingdom of soulful guitars, astounding solos, clapping hands and GIPSY 4 EVER fiesta! 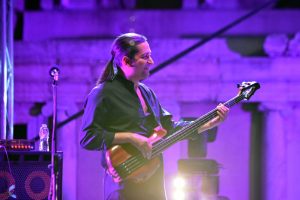